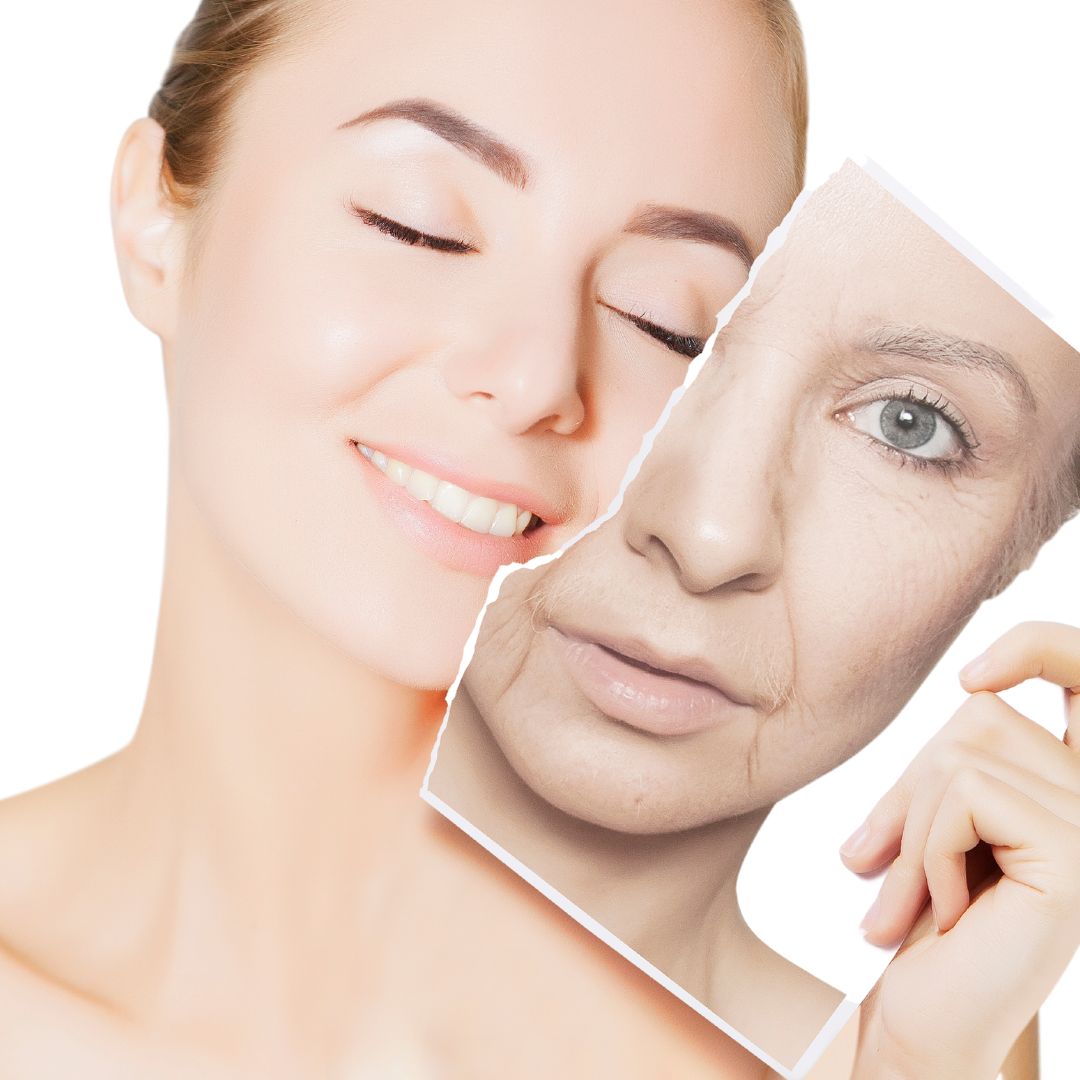 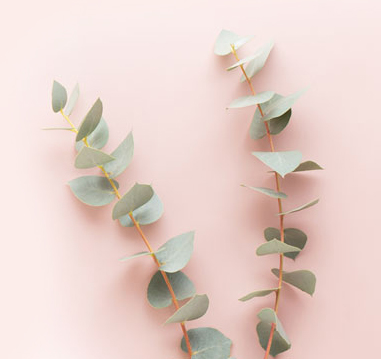 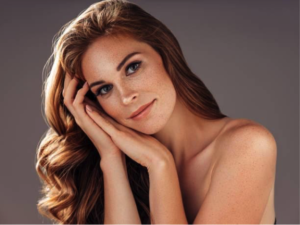 A facelift, also known as a Rhytidectomy, is a surgical procedure that focuses on correcting an aged appearance of the face. Over time, there is a gradual loss of skin elasticity across the face’s bone structure. The effects of gravity and other factors start to show on the face, producing a tired, drooping, and aged appearance, which may be less than a desired aesthetic. A facelift procedure will lift the drooping facial skin around specific regions of the face such as around the cheeks, jawline, and neck and reduce the prominence of harsh lines and creases. The procedure restores a youthful contour and stronger definition to the mid and lower part of the face.

Dr. Makhlouf will analyze facial aging in a matter of three stages include the following:

Everyone ages according to these levels, in different ways and at different rates- for this reason, there is no ideal age to have a facelift. Gravity and genetics determine the rate of skin aging, also activated and accelerated by individual lifestyle factors such as smoking, exposure to the sun, poor nutrition, acute stress, or considerable weight loss.

Dr. Makhlouf examines the patient in this framework, notes at which level the aging process is primarily occurring, and will base his procedure recommendation on this level. Dr Makhlouf strives for natural results; he firmly believes that the treatment should be proportionate to the amount of aging present. Accordingly, he chooses the method of treatment that will give the most remarkable result with the least intervention.

Planning for the procedure involves establishing the fixed points on the face and moving the loose skin to the fixed points by correcting the sagging. (Please See Photos for demonstration purposes). A horizontal line is made between the corner of the eye and the upper ear.

The fixed points (marked blue on the images):

The Moving Points (marked green on the images): 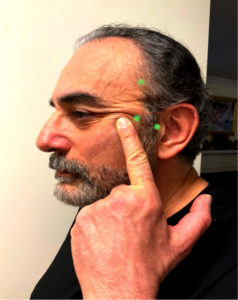 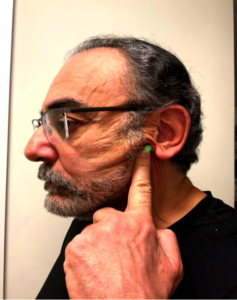 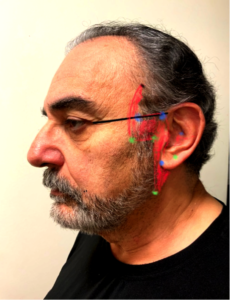 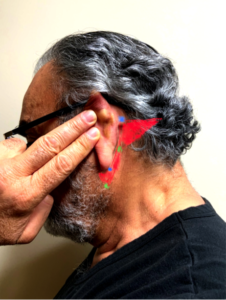 The corresponding points on the face meet above mention points. By lifting the tissues upward these are marked green on the images. The area in red represents the skin that will be removed when the green points meets the blue point. This gives the surface plan; the fat repositioning represents the plan for the deeper tissues.

There is a small variation in the incisions made for men and women. Essentially the incision has to start at the junction of the hair and temporal area or within the scalp above the ear, it moves in front of the ear, but Dr. Makhlouf prefers hiding part of it at the entrance of the ear canal. After it passes in front of the earlobe and then turns behind it. At that point, it has to go across towards the hair-bearing scalp. That turning point is behind the upper part of the ears because the scar is hidden while it heals. Later it becomes invisible. Excess skin is taken out throughout all the incision lines, the amount depending on the laxity of the skin and the pull.

Not uncommonly adjunctive procedures are done at the same time. Blepharoplasty (eyelid surgery) is the most frequent, but lip lift, per-oral dermabrasion, chemical peel along fillers, among other interventions, are done as well.

Dr. Makhlouf performs the facelift procedure with general anesthesia or with intravenous sedation and local anesthesia. 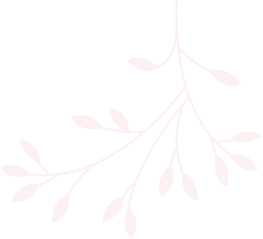 Patient Safety is Our Priority

At Enhanced Form Plastic Surgery, all surgeries are performed by Dr. Makhlouf in a modern accredited surgical environment, on an outpatient basis. The facility is fully compliant in meeting stringent state regulatory requirements for patient safety, anesthesia, and surgical performance. The organization of the American Association for Accreditation of Ambulatory Surgery Facilities (AAAASF) provides the accreditation award.

AAASF certification extends beyond the medical facility itself, to the medical staff who demonstrate a strong commitment to providing the highest standard of plastic surgery specialty care and concern for the patient. Your highly skilled medical team includes a qualified board-certified anesthesiologist with a mastery of anesthesiology skills, knowledge, and commitment to a high standard of medical ethics. You may be assured of unsurpassed quality of medical and surgical care that will determine your results as well as your experience.

The patient goes home the same day of the surgery with drains, which are typically removed the next day. Sutures are removed after one week, and the bruising is gone by ten days. The incisions are usually well hidden. Generally, patients can go in public for one week, and be comfortable to go out for dinner in 3 weeks with minimal make-up.

You can see the results of some of Dr. Makhlouf’s facelift surgeries in the photo gallery.

For more information about this procedure and others, please contact our office at: 847.297.8001

Ready for a Consultation?

Ready to Enhance Your Form? Give us a call 847-297-8001, or fill out the form and one of our patient coordinators will get back with you. Thanks!

Everything you need to feel healthy and beautiful